Welcome to Eloran. Click on any of the links below to find out more about the lands of Eloran.

The Fading Lands Other Kingdoms 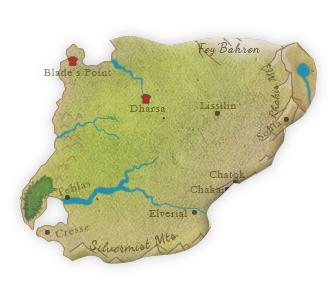 Shrouded behind an impenetrable curtain of magic known as the Faering Mists, the Fading Lands are home to the Fey, a race of legendary, fiercely powerful immortals. Also called the Shining Folk for their incomparable beauty and the faint luminosity of their pale skin, the Fey are champions of Light who throughout the millennia have willingly sacrificed themselves again and again to defeat the forces of darkness in the World. Their greatest enemies are the followers of Seledorn, God of Shadows, chief among them the dark-souled Mages of Eld. The Fey used to mingle freely with other races, but after the devastation of the Mage Wars, they returned to the Fading Lands, erected the Faering Mists, and withdrew from the World.

Geographically, the Fading Lands is well-isolated from its neighbors. An impassible volcanic mountain range called the Feyls borders the north and merges with an equally formidable non-volcanic range called the Rhakis which runs north and south along the eastern border. Elvia’s Valorian and Silvermist mountains protect the Fading Lands’ southern border, and the Lysande Ocean and the rolling hills of the Vanyas mountains guard the west. The only easy entrance into the Fading Lands is through the Garreval, a ten-mile wide pass leading from the mortal kingdom of Celieria between the southernmost peaks of the Rhakis and the northernmost mountains of the Valorian range. A towering fifty foot wall and the Faering Mists keep the Garreval blocked from all would-be intruders. Once a vast desert, thanks to the magic of the Fey, the Fading Lands is a paradise of legendary beauty.

Cities and Villages of the Fading Lands