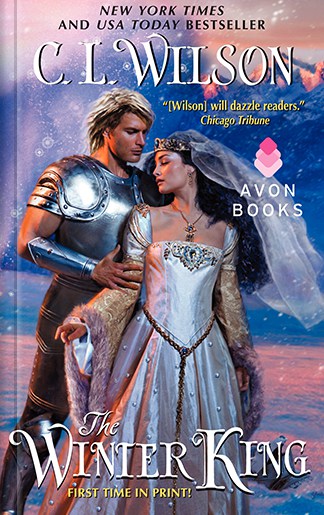 After three long years of war, starkly handsome, Wynter Atrialan, will have his vengeance on Summerlea’s king by taking one of the man’s beautiful, beloved daughters as his bride. But though peace is finally at hand, Wynter’s battle with the Ice Heart, the dread power he embraced to avenge his brother’s death, rages on.

Khamsin Coruscate, Princess of Summerlea and summoner of Storms, has spent her life exiled to the shadows of her father’s palace. Reviled by her father, marriage to Wintercraig’s icy king is supposed to be a terrible punishment, but instead offers Kham her first taste of freedom and her first taste of overwhelming passion.

As fierce, indomitable Wynter weathers even Khamsin’s wildest storms, surprising her with a tenderness she never expected, Kham wants more than Wynter’s passion – she yearns for his love. But the power of the Ice Heart is growing, dangerous forces are gathering, and a devastating betrayal puts Khamsin and Wynter to the ultimate test.